Do you remember when you used to get toys in the packets of cereal? As a kid I would love to make portions and perfumes. Then I started to get into properties of liquids and solids. There was one experiment where I mixed a few household ingredients and ended up with a thick mass.

It was part liquid and part solid. I was amazed. If you pushed your hand into it slowly then it would act with a thick liquid… But if you slapped it then it was hard, solid.

It blew my mind. The fact that something could be both a solid and a liquid.

I had discovered science.

After that anything to do with science I had to have a go at. It didn’t matter what it was, I just wanted to know everything. At the time I couldn’t read so I had to ‘do’. I had to pick up the stuff and physically experiment. Then there was this toy.

A silly plastic thing in a box of cereal.

But we had very little money and buying a box of branded cereal was an extravagance. I so wanted this toy though. I wonder how many times I asked Mum before she caved but a week or so after I started there in the cupboard was the packet… 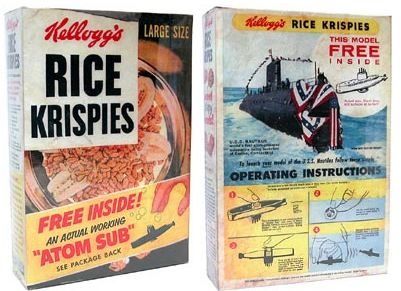 I hated rice krispies… The sound was cool but I found that the taste not great, still I opened the packet and started. Every morning I would eat the snap. crackle and pop, until finally there was a crinkle of plastic and in my bowl, cushioned on puffed rice pieces sat a submarine.

It was ugly and grey (although in my imagination I make it yellow). But it was here.

“Now?” I asked, already getting up.

So I waited through school. I twitched and turned and eventually the home bell came. I ran home that day.

The simple opening of a plastic cover and I was grinning. Then Mum helped me fill the little compartment with baking soda. In a sink I dropped it into the water… It fizzed and shot though the water.

I was hooked. Baking soda was it’s fuel and that sub went on adventures in the bath tub, sink, kitchen, random bowl. Anywhere I could drop it in water I did.

Even if it is as small as putting baking soda into a small plastic submarine.