I don’t normally write reviews, but this is something to do with my Ph.D. I want to show that environment has more to do with writing tales than people realise.

There are spoilers in here so only read on if you have seen it.

How does this equate to The Greatest Showman?

Well, the cast that is featured is Tom Thumb, the bearded lady, the black high flyers and the failed playwright. Oh, and of course, PT Barnum and his family.

In the background, you can see the Chang brothers, albinos, the tattooed man, the tallest man, the fattest man… Oddly it is these background characters that will be known in history. Google the Chang brothers and you can learn about the Siamese twins that were joined at the chest but in the movie they are simply seem dancing in and out of shot.

So, the story-line is centered around PT Barnum, but there are other subplots that are far more interesting. The fact that the bearded lady has to overcome her shyness to reach her full potential, and that potential is in front of the audience. The female black flyer has to risk everything for love, and the playwright has to lose everything to be happy. The old adage, money doesn’t buy you happiness runs through the whole movie.

The movie never mentions his first act, meant to be the oldest black woman alive who was meant to have been a nurse to George Washington. The woman was a slave and Barnum bought her time. No mention of slaves in the movie. Joice Heth was blind and partially paralysed. Barnum had her on show for upto 12 hours a day. She survived one year before dying… Barnum then sold tickets to her autopsy. (1)(2)

This is the man who acknowledged he was out “to put money in his own coffers” (3) and that there was a “sucker born every minute” (4), Yet throughout the movie it is more about letting go of fame and wealth and accepting who you are. In fact, Barnum is meant to lose everything before he learns this lesson. But Barnum wasn’t Hugh Jackman… He was a man out to make a profit.

There is no mention of exploitation, wages or living conditions. Instead we are asked to embrace the reality that the ‘freaks’ of the circus are one happy family.

There is no mention of the largest elephant that ‘died saving the life of his keeper and a small elephant’ in a railway accident. It was a lie of course. The large elephant was struck by a train because he didn’t clear the line in time. But that isn’t the last of ‘Jumbo’. He was stuffed and another elephant purchased to exhibit alongside the carcass. 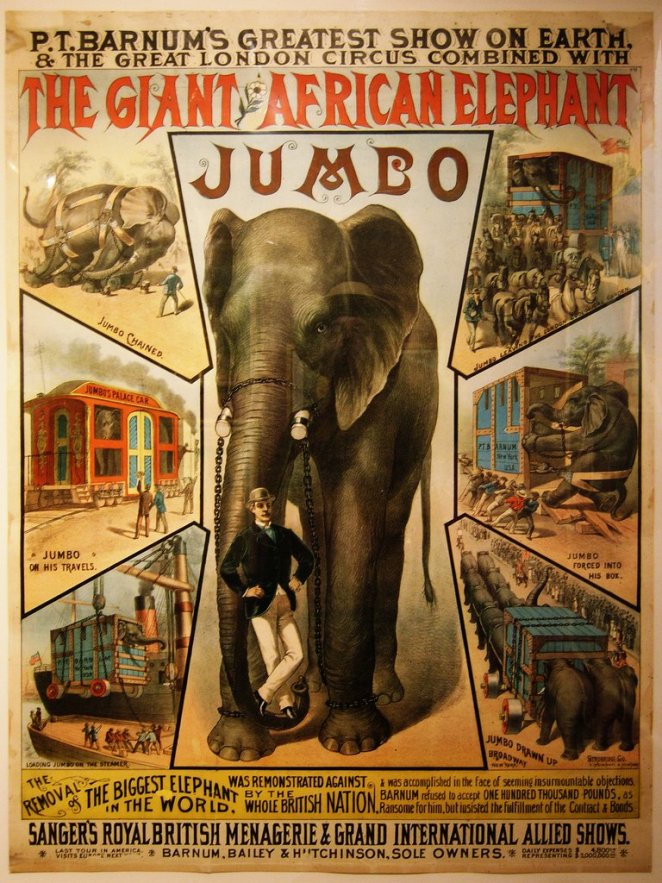 So, the movie has beautiful CG created elephants and tigers, the former decked out in gold and cloth… The reality? Perhaps, but Barnum would have exploited rather than ‘rescued’.

The movie deals with race being as ‘freakish’ as disability and tattoos. The playwright and the female Afro-Caribbean flyer are caught in a mixed race love-story . Not until he had given up everything and they had been able to “re-write the stars”. I’m mixed race and the racism I have had to deal with makes this plot seem unbelievable to me. But perhaps within the ‘circus’ it was able to happen… But this plot may say more about the present day America than the past. The racial tensions that are an everyday reality in the US are highlighted in Childish Gambino’s music, ‘This is America’. Perhaps the love affair is trying broach the subject, but if they are trying then perhaps they ought to have used more than one kiss and holding hands. Race isn’t mentioned in the movie except by oblique reference. If they wanted to address the issue perhaps they ought to have made more of a song and dance about it. (Okay, that is a really bad pun).

What is with the drinking in this movie…? PT Barnum was a Calvinist and a T-total-er… Would never have touched a drop, although he may have given you a good hours lecture on why the drink was pure evil.

Then we come to Jenny Lind. In the movie she falls for Barnum and after he rejects her quits the tour and leaves Barnum penniless. The reality? Barnum was fronting the tour, but Lind used a clause to effectively fire him because she hated the way he marketed the tour. (5)  She finished without him, netting herself $350k and Barnum $500k, Lind gave all of hers to charity. (6)  Perhaps the ‘evil’ seductress is easier to understand than a level-headed smart woman. I find this a sad comment on our views of gender, especially in light of recent equality issues and sexual harassment cases.

The Greatest Showman is a good movie, it makes you laugh and will give you a smile. But as with all tales, it is far from the reality. It’s a story and not fact. A fairy-tale of PT Barnum that never existed. And it says more about our treatment of race, disability and gender today than it does of the past.

(1)  Mansky, Jackie (December 22, 2017), P.T. Barnum Isn’t the Hero the “Greatest Showman” Wants You To Think – His path to fame and notoriety began by exploiting an slave woman, in life and in death, as entertainment for the masses, Smithsonian

3 thoughts on “PT Barnum and the Greatest Showman”