You have no power over me…

That was the line that Sarah always forgot in the Labyrinth. Upon saying it the Goblin King and his world shattered, a happy ending.

Except it wasn’t. As the owl that was the Goblin King sat outside the window and looked into Sarah’s bedroom filled with laughter and fun, I felt sad. All he had wanted was someone to be his… Surely that was a good thing to want even if he had gone about it oddly.

As a child I sided with the Goblin King, so when the man who had portrayed him died the a few days ago I felt a little bit of magic leak out of the world.

David Bowie was a huge influence in my life. I don’t admit to liking all his music but for me he showed how acceptance is the greatest gift you can give anyone. As his personas flickered through time and changed I found that I couldn’t wait to hear the next part of his story.

I don’t see this as an ending but I do see it as a loss. I agree with Neil Gaiman – my hero has died. 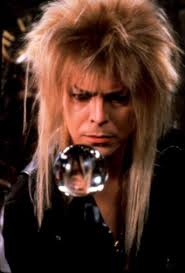