Yep, for the last week I have been working hard… Except it hasn’t been on the writing or the drawing. Instead, I have donned a red hat and pointy ears. I became a Christmas elf.

I wasn’t making gifts or anything along those lines, but I was creating a Christmas Fair. We are a committee of two and every year we decorate the hall and the grotto. Last year we went with a snowflake theme and we carried it over to this year. With the help of the hall manager and a very long ladder the hall became a winter wonderland as opposed to a bland memorial hall.

We had twenty eight stalls and over 518 people walked in and had a look around. It was a great day and night. I was there with my few bits… 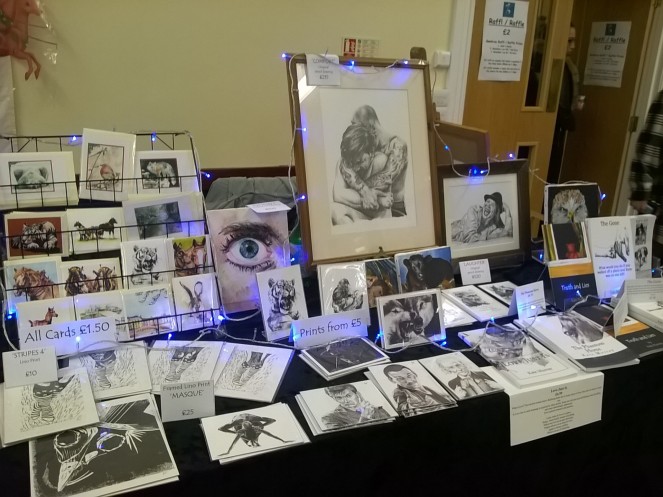 A bit of a miss-mash with art and books, but it worked. In fact the whole night worked. I’m glad to also say that Santa was busy and he didn’t run out of toys.

For another year we can also keep Santa free… I know that it is odd to have a free Santa and to let the kids have a toy, but it is something that we believe in. Christmas is for the kids.

We finished the night with the local male voice choir and a wall of sound. Then the lights were turned on outside and there was a Santa Run… It was brilliant, and I can’t wait for the next.