“How long?” Sasha said, hardly believing what the man had said.

“Six hours,” he said, with a nasal voice that made Sasha want to ask him to speak up. Although at the moment she felt like grabbing his perfect blue uniform and screaming at him that he had to be joking. The man wasn’t even looking at her, in fact he was staring at something behind her shoulder.

Sasha turned and looked only to see herself. He was staring into a mirror. Sneering she turned back.

“Six hours?” she said, sharply throwing his words back to him.

He nodded and, still looking in the mirror.

Sasha leaned into his line of sight. “What am I supposed to do for six hours?”

He looked at her, a blank uncaring expression. “You can have this and go have a complimentary coffee.”

Sasha took the ticket and stared at it. When she looked up the man had retreated behind his desk and was putting a ‘closed’ sign out. He ignored the queue in front of him and walked into the back room, closing the door behind him. The roar that followed him made Sasha’s ears hurt. 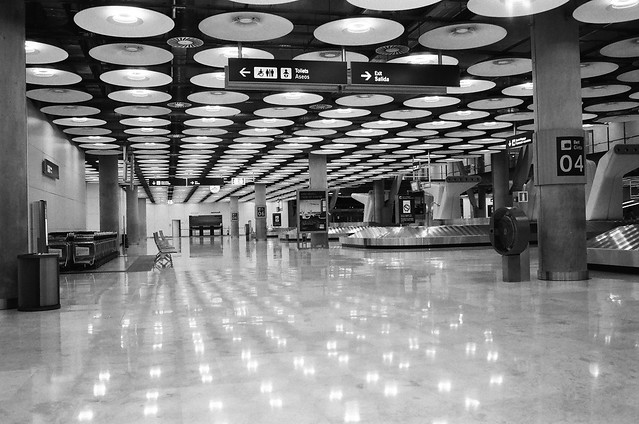 “Well, that’s the last time I fly with these fools.” The voice came from her left and Sasha looked across. There was a man in a business suit, very smart, holding a brown leather briefcase.

“Have you checked your phone?” he asked.

“There’s no internet either.”

“And the TVs aren’t working.” He nodded over to the bank of screens, everyone showing flickering grey snow.

The man shrugged. “I don’t know, but what is more worrying is that we are the only ones here.”

Sasha’s eyes went wide as she turned. There was her group and then… No one. “What…?”

“I don’t know, but I think we ought to check. Stay here and I’ll talk to the others.” The man walked forward and soon the party was quiet and looking around worriedly.

Sasha heard one woman. “Maybe we ought to go with him.”

“No,” a man said, his arm around her waist. “They said they would be back.”

The arguments started then. Sasha went over to a line of plastic seats, all of them bolted to the floor. She sat and watched the party turn on each other. Their voices got louder and about ten minutes in she noticed that the airport official was exiting from a door. He wasn’t visible from the main group. Leaving her bag there she got up.

Slowly  she walked up to the man who was busy locking the door.

He jumped and turned around. “What!?” His voice was a stage whisper. His eyes darted around her, looking for the rest of the group.

Sasha stepped into his path. “Make time or I’ll scream.”

He looked at her, eyes cold and calculating. “There has been an accident.”

“A virus, it’s something like small pox but…” He shuddered.

“So the six hour thing is a ruse?”

“I just need to get away. You will be fine. I left a message with the emergency…”

Sasha turned from him and walked away. She knew that she ought to have stayed and listened but she also knew that they were on their own. No one left a message with the emergency services, they picked up straight away.

She went to her bag. The man in the suit jogged over. “Where did you go?”

“We need to leave.” Sasha then told him what she had found out. The man went pale.

“I need to tell the others.”

This post was inspired by the daily prompt – terminal time. I think it is going to be a lot bigger… 🙂

4 thoughts on “Tea and biscuits.”