I had to put my cat down the Monday just gone. He was only two. His name was Alfie and he was a pain. If there was something wrong he was at the bottom of it.

The day we woke up and found every sofa and chair covered in oil and there is the middle of it all sat a very unhappy Alfie. He had actually fallen into dad’s bucket of old engine oil. He reeked and we had been scrubbing for hours. Luckily only one chair had been fabric at the time – the others leather. But we were cursing him for ages for the little black footprints on the carpet.

He would yell at you for food or if he got stuck and he did get stuck. He was never great on his pins. He would fall off stuff or come in limping. It was just normal for him to be in the wars. But he was a great ratter and on a smallholding you need a good cat.

So I went on holiday last week.

Mum rang and said that Alfie had been out of sorts and unable to walk properly. Dad had taken him to the vet and they had given him a shot of painkillers and antibiotics. He was improving.

Sunday night I rang the vet. They said to bring him in the next day. I barely slept.

By then we had noticed he didn’t seem to have control of his bladder or bowel. But the vet had suggested an x-ray would show them what was wrong so I took him thinking it would be a quick job.

Me and Alfie sang the whole way… He did that. He would sing to music. He was a very vocal cat.

We arrived and the hustled me through to see a young girl. She looked him over and sighed. It was the sigh that got me.

“He has a tail pull injury,” she said.

“His tail has become trapped and he has broken his back.”

I had questions. the main one was how… She couldn’t say. We could rule out a car and a person or another animal. He had no sign of any other trauma.

She laid out the options. There was no way he would get 100% better. The break was unusually high. In fact, she was surprised he could still walk – if a little wobbly. And then I looked at my cat.

He stared at me with dull eyes and a pained expression as his bladder let go again.

“There is no choice,” I said and gave them the go ahead to put him to sleep.

He must have known.

She came in with the shaver and a cannulae and he held his paw out. She took his hair and he let her. He hates to be brushed. So this was very strange.

Then she inserted the needle and gave him the injection.

It was blue. I hate blue.

I held him and spoke to him the whole time. Then he just wasn’t there. Gone.

Life is a fragile thing, so enjoy it when you can because a simple accident can leave you alone.

I miss his singing. 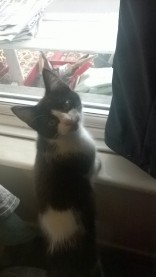 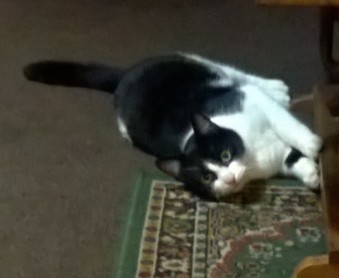